Today, we see art in all it’s forms and expressions, going beyond the canvass and into various mediums that either channel the artist’s emotions or move us and encourage us to think. But given the advent of technology and the various mediums that were invented much later than the time great art was already being created, it’s hard to draw a line at what counts as art and what is just noise in the background.

For instance, take Da Vinci’s popular painting, the Mona Lisa. There’s no doubt whether or not we’d consider it of art, given its painter, its value, and the security measures the Louvre is taking to protect it, but would you also consider this photo a work of art? 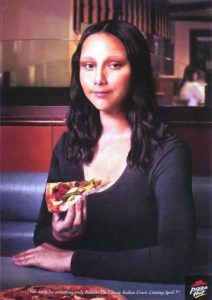 It’s a 2003 ad from Pizza Hut advertising their Classic Italian Crust. It’s inspired by the Mona Lisa, the face looks slightly similar to the painting, and it follows several elements of art such as the shadow, the focal point, and the expression. It’s aesthetically pleasing, and the only differences between this and Da Vinci’s work is the artist who made it and the purpose of the painting. Da Vinci supposedly painted the Mona Lisa as a commission from a merchant to paint a portrait of his wife, while this is meant to advertise a product.

And it’s not just printed ads that blur the line between art and advertising. Film and theatre are a form of art, but we often forget that, while they weren’t made to be a commercial, they are subject to product placements from sponsors and are created with the intention of creating a profit from its viewers.

So, because of the purpose of profit, does an ad lose the right to be called a work of art because it’s an ad, or is it right that we recognize the art and the artist who made the ad?

What Makes Good Art? And Does It Apply to Ads?

ArtBusiness interviewed several art professionals in the United States about what makes good art, and this is what they had to say. Art should be unique and well-executed. It should be visually stunning and surprising. It should have intention, dedication, patience, and perseverance. Art is engaging, timeless, and represents the time it was created.

It’s these criteria that match some of the ads we see today. We remember certain ads because they’re interesting, unique, and memorable. Ads were carefully thought by advertisers, made to perfection by graphic designers, and released to the public by marketers. It moves people, questions the way we think or see a product. It’s engaging, otherwise why do brands spend millions of dollars to get it out there? And some commercials and print ads are so timeless and memorable that they’re a part of our culture and copies of it are stored in museums and the Library of Congress.

In the halls of Smithsonian’s National Museum of American History and the Library of Congress, you’ll find works from P&G, Krispy Kreme, Hills Brothers, Coca-Cola, and other brands – all advertisements dating back to the late 1800’s. In fact, P&G has donated 5,000 print, TV, and radio ads, while Coca-Cola has donated commercials spanning 50 years of its operations.

These ads belong in such institutions because they’re culturally significant and a part of America’s history. We can’t deny, for example, our patriarchal system in the 1960’s, and it’s reflected in older ads that reflect these beliefs. To deny ads’ rightful title as a work of art is to say that all ads are just superficial drawings and words designed to get people to buy things. But it isn’t, because that wouldn’t sell.

Art and Culture, But Not High Art?

In the world of art, we have this idea called “high culture,” which in turn produce high art. These are the works of art, literature, and philosophy that are seen as exemplary, high-class, intelligent, and is associated with the upper class or the thinking class. This is in comparison to “low culture,” which is the works of art, literature, and philosophy meant for the less-educated and supposedly dumbed down for the masses. Confucius, for example, would be seen as high culture; Jaden Smith’s tweets since 2014 would be low culture.

Some art critics argue that while ads do have a place in cultural centers and are historically significant, it will only be low culture art, nothing that could ever match the works of a Picasso or a Monet.

Mary Warlick, an art historian and executive director of The One Club, an organization that recognizes creativity in advertising, believes art is meant to elevate thinking, whereas advertising tells us what we already know about culture and history and twists that into something we need to buy. David Lubars, president and executive creative director at the advertising agency Fallon says while ads can be artful, it is not art because it exists to sell an idea. Rich Silverstein of advertising firm Goodby, Silverstein & Partners agrees, saying ads are made for the client, but it’s not like real art where it’s made for the artist or their peers. 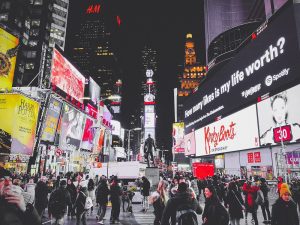 However, this is not an opinion all people in the art and advertising industry share. Charles Sable, an art curator, believes it is modern vernacular art form that reflects society. Meanwhile, Stan Richards, founder of advertising agency The Richards Group, believe that if add look good enough to hang or display, it is good enough to be considered art. He cites how several businesses and private individuals use old advertisements as art.

Can commercials and print ads be considered art when many see the difference between the two is profit and purpose? The jury is still divided on this one. But as a graphic designer who’s put thought, effort, and a lot of time into one poster, I think it is a work of art. Maybe not one that will end up next to the Renaissance section of a museum, but one that is relevant after years and a reflection of who we are at any given point.