When you’re handing dangerous materials, entering a contaminated area, or may get harmed when using a product a wrong way, you might have encountered a warning sign, symbol, or label. These are meant to warn the user, employee, or anyone involved about the risks associated with the item or the location. On one hand, they’re meant to protect the user. On the other, it decreases the liability of the manufacturer or the seller. It might be stating the obvious (have you ever seen a container of rat poison saying people could get harmed by consuming rat poison?), but it’s really for legal purposes: since the user was warned, they cannot sue the manufacturer for what happens to them if they misuse the product.

You might have already seen a few of them. On cigarette cases, you’re warned that cigarette kills (and you can’t sue the manufacturer for getting lung cancer from willingly smoking). In cleaning products, you’re warned to use it with care and not to get it in your eyes. And when you’re on the road, these triangular signs warn you to exercise caution.

Some specifically have words to warn you, while others use wordless signs and symbols. For the latter, whatever language you speak, these are pretty understandable. And given that we were raised, not born, to understand these symbols, thesedesigns are very effective in giving the message. But what makes a symbol, sign, or label effective?

Signs, symbols, and labels communicate, and effective communication follows certain criteria. There’s motivation or a reason to communicate – say, a warning or telling a person that they will be harmed in some way if not careful – and it’s made into a message. That message can be encoded into any way – these are the pictures and texts we see in signs – and then it is transmitted, meaning it is printed or placed in a certain are. 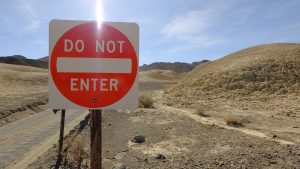 Before it can get to the receiver of the message, however, there are these things called noise sources. We’ll get to that later, but basically, these are the external forces that influence how the message will be taken. For example, if you place a warning sign on the road in a place where it will be too late for the person to see it and act accordingly, they could learn about the warning too late.

Either way, the receiver receives the message, decodes it, and interprets it – meaning they understand the danger in the product and they react accordingly. Signs, symbols, and labels that do not have words in them are some forms of non-verbal communication. This means that, on a subconscious level, you understand what it means either from instinct or from experience.

Noise sources affect how a person sees a sign or symbol. For example, centuries ago, a skull in front of crossed bones were used to symbol poison, death, and pirates, and you’d find the symbol on poisonous substances. However, there came a point that it became less associated with poison and death and mostly about pirates. And since western pirates that used this symbol became less and less popular, its association to that symbol shifted to Hollywood and Halloween pirates, though its original association to poison and death is still known.

Signs That Stand the Test of Time

One issue of keeping signs effective, therefore, was whether or not it could last after decades. In the early 20th century, there was no universal biohazard sign, which meant that various countries and organizations had different ways of saying so. This posed a risk because there wasn’t one effective way of communicating biological danger. This was only addressed in 1966, when engineers and designers at Dow Chemical, led by environmental health engineer Charles Baldwin, performed a study to determine a good universal symbol for biohazards.

They followed the following criteria: It had to be noticeable, unique, has never been used before, recognizable, easy to draw, symmetrical so it can be recognized from all angles, and it had to be acceptable for people from all backgrounds.

According to Baldwin, these criteria would help them find a symbol that was memorable but had no meaning yet so that people could be taught its meaning. During the experiment, they asked 300 Americans to look at 24 symbols. Six of these were proposed biohazard labels, while the other 18 symbols were recognizable brand logos and symbols. They were asked for the meaning of each logo, and from there the researchers measured how meaningful a symbol was.

The following week, the participants were asked to look at the symbols once more, plus an additional 36 symbols. They were asked to pick out the symbols that were featured in the previous study. From there, the researchers could graph which symbols were memorable or forgettable, and which ones were meaningful and meaningless. Out of all the symbols, one stood out as both meaningless but memorable, and that was what became the biohazard sign we know of today.

However, there’s no telling if this warning symbol will last. Unlike other logos and symbols, warning signs are supposed to be eye-catching, but it’s not supposed to entice a person to go near it.

An effective warning symbol should also be able to warn the extent of the danger, writers from Harvard Business Review argues. This is because some signs fail to distinguish between large and small risks, citing the analogy of wolves and puppies. Wolves rarely attack, but when they do, there are huge or fatal incidents. Puppies, however, bite more than a wolf would, but when they do, it’s usually a minor scratch. 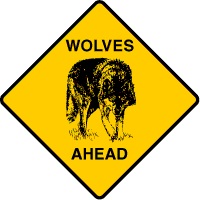 The problem is that when a sign or label says warning regardless of the risk as a wolf or puppy, people eventually ignore or underestimate the risk because they encounter small incidents more frequently than bigger ones. So, when a product provides a wolf-sized risk, people learn to ignore the warnings.

And we’re surprised the younger generation forgoes the warning label on Tide Pods.

An effective warning sign must be able to signal clear danger to people regardless of the language they speak or from where they are standing when they see the sign. However, an effective sign must also show the brevity of the risk to warn the user of how bad the risk can be. While a perfect warning sign that will last centuries has yet to be perfected, designers will have to keep drawing new ideas and working with safety and health professionals to produce a symbol that warns consumers on time.